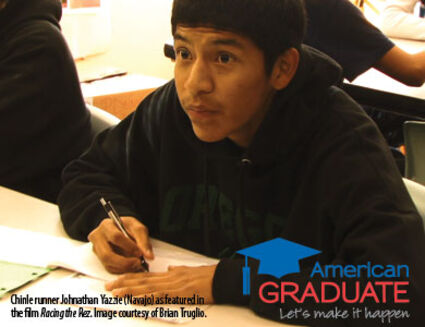 NAPT’s American Graduate webpage features films, internships, social media and community engagement strategies to combat this national issue. At http://www.nativetelecom.org/amgrad, NAPT showcases how Native communities are tackling the high school dropout crisis. The webpage also features blogs, as well as nationally released results from the 2011 National Indian Education Study. This study reports that American Indian and Alaska Native students lose ground in comparison to their peers in reading and also lag behind other racial groups in mathematics in both grades 4 and 8—the grades for which the study was conducted. NAPT is encouraging American Graduate programming amongst Public Television stations nationwide, as well as the utilization of NAPT’s educational learning objects in conjunction with classroom and community screening partnerships to serve as a catalyst for change.

Standing Bear’s Footsteps is in the midst of a large comprehensive interactive learning campaign in Native communities and classrooms across the U.S. in anticipation of the October 15 PBS broadcast. The campaign is offering American Indian and Alaska Native students a way to connect to their culture and for teachers of non-Native students, it is providing a way to better understand American Indian history. The Youth Media Workshops are generating online digital shorts on the “Meaning of Home.”

Public Television stations New Mexico PBS, Vegas PBS and KVCR’s First Nations Experience (FNX) have partnered with NAPT to offer a paid, multimedia summer internship at each of their locations. The three internships are focused on the research and development of American Graduate outreach to the Native communities each of the stations serve.

The American Graduate Initiative recognizes the need to help students stay on the path to graduation. Established by the Corporation for Public Broadcasting (CPB), with participation from PBS, America’s Promise Alliance and the Bill & Melinda Gates Foundation, this new, innovative program will combat the dropout crisis in the United States.

You can make a difference! Visit http://www.americangraduate.org for more information.

Native American Public Telecommunications, Inc. (NAPT), a nonprofit 501(c)(3) which receives major funding from the Corporation for Public Broadcasting, shares Native stories with the world through support of the creation, promotion and distribution of Native media. Founded in 1977, through various media—Public Television, Public Radio and the Internet—NAPT brings awareness of Indian and Alaska Native issues. NAPT operates VisionMaker, the premier source for quality Native American educational and home videos. All aspects of our programs encourage the involvement of young people to learn more about careers in the media—to be the next generation of storytellers. NAPT is located at the University of Nebraska-Lincoln. NAPT offers student employment, internships and fellowships. Reaching the general public and the global market is the ultimate goal for the dissemination of Native-produced media. For more information, visit http://www.nativetelecom.org.