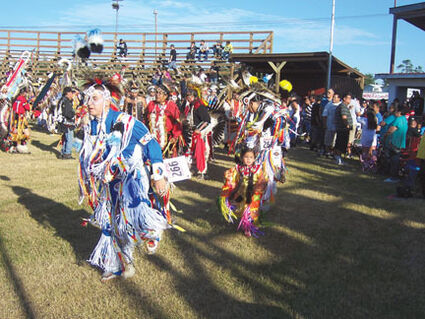 Hundreds of participants from tiny tots to elders arrayed in styles of regalia ranging from men’s and women’s traditional to jingle dresses and grass dancer outfits made Grand Entry Friday at the 2012 Red Lake Nation Independence Day Powwow. Grand Entries today will be at 1 and 7 p.m., with Grand Entry on Sunday at 1 p.m. hoto courtesy Molly Miron

“We’re going to start on time,” he says over the loudspeaker. “Those of you out there braiding your hair, braid faster.”

On July 6, 1889, the Red Lake Nation chiefs signed a treaty with a representative of the United States government. They avoided the Dawes Act allotment of their lands to individuals. Consequently, all Red Lake Nation territory is held in common by all tribal members, rather than being parceled out like a checkerboard.

Every July, members of Red Lake hold a celebration to commemorate the perseverance and determination of the chiefs who kept their remaining land intact.

The dancers adopt various styles of regalia depending on their type of dancing. For example, Akisha Manning-Peters, 9, of Sisseton, S.D., wears a red fringed outfit for his grass dancing. Kyleisha Garrigan, 8, of Red Lake is a fancy shawl dancer in a yellow and blue outfit. She introduced her baby brother, Avery Merrill. The little boy’s father said that at 8 months, Avery is too little to dance into the powwow circle, but next year he’ll be ready.

Other regalia include men’s and women’s traditional and jingle dresses decorated with scores of snuff can lids rolled into cones to flash and tinkle in time to the music. Each outfit reflects the taste and individuality of the dancer.

Eleven drum groups performed Friday, with more expected for the rest of the weekend.

Some of the dances are competitive, with prize money awarded. The categories range in age from “Tiny Tots” to elders, boys and girls and men and women.

Hereditary Chief John Sumner of the Eagle Clan, 73, said he has been attending powwows at Red Lake since he was a boy.

Following the Grand Entry Friday, Spiritual Leader Larry Stillday opened the main events with prayer. He explained that the traditions are not just Anishinaabe or spiritual, but for everyone.

He said his opening remarks “call the powers into alignment. It gets everybody into that natural rhythm of the universe.”

As Stillday concluded his prayer, the heartbeat of a drum group picked up the flag song, followed by a relay of songs around the circle for the series of dance categories.

The celebration will continue today with a parade, which steps off at 11 a.m. opposite the Red Lake Hospital. Powwow Grand Entries will be held at 1 and 7 p.m. today and 1 p.m. Sunday. The powwow grounds near the Red Lake Community Center also feature food booths and craft stalls.