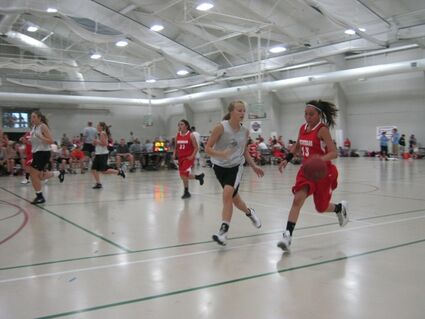 June 16-17 - St. Joseph, MN – The teams departed Friday afternoon to the team headquarters of the Holiday Inn & Suites in St. Cloud. We arrived in time to get some pool, arcade and basketball court time at the hotel. The boys qualified for the Invitational by having only one loss in the Regional, to the eventual champions Crookston. The Girl’s qualified for the State tournament by winning the Regional tournament held in April. The boys were up Saturday, and the girls Sunday.

First up for the boys was Caledonia. It was a slow start for us against a much taller team, but we were able to hold the lead at the half 17-13. We held that lead until 1:46 was on the clock and they hit a huge 3-pointer, followed by another with :56 on the clock! We were forced to foul them to get in the bonus, which is 2 shots on the 6th team foul. They missed their free throws, and we set up a nice play to get us to the front of the hoop for a layup, but a no call on what appeared to be a foul injured one of our players and we were forced to foul again with 2.6 left on the clock down by 2 points. They missed both and we got the rebound and called our last timeout with 2.6 seconds to set up a half court prayer. We executed it to perfection and got the look from halfcourt, but it was about 3 inches too far to the right as it bounced off the board and looked like it would have went it!

In the first game of the Consolation bracket we faced the team from Fon du Lac in the “Battle of the Ogichidaag” as their team name is Ogichida. These boys have faced each other in the past and had some good games. Red Lake was able to hold the halftime lead 20-16. Things got close in the second half as FDL battled back to keep the game close, however Red Lake was able to hit some big free throws on a Technical Foul and Intentional Foul, and then were able to catch the defense off guard with some nice ball handling and movement to run out some clock before being sent to the line to hit some more free throws. Final score 36-30 Red Lake!

This set up for a match against New London-Spicer, another team with height. We were able to hold onto a 16-13 halftime lead that saw them gain a little momentum towards the end. In the second half it was close throughout with both teams playing well. We were able to hit some huge free throws down the stretch going 6 for 6! The game ended up going to Overtime! In the OT session Ira “Boo” Spears connected from downtown for 3, and then we came back down and William “Boo” Chaboyea, fresh off the bench, came up with a huge 3 with less than a minute remaining! We held them to 1 point in the 2minute OT. This win advanced us to the Consolation Championship!

Dover-Eyota was the opponent, a team from east of Rochester, MN. The game was a good classic championship battle with neither team able to pull away, but late in the second half we missed some big shots that they scored on and captured a 40-36 victory over us. Jimmy Jourdain led us with 15 pts! The boys played hard and left it all on the court, and gained a lot of respect from the officials and opposing fans, some officials have been there multiple years and said it’s always a pleasure to watch this team because they’re “exciting to watch”. An interesting fact about this team in the Pacesetter Regional and MIT tournaments is that when they lose in the 1st round, the team they lose to goes on to win the Championship! It was true this year as they lost to Crookston in the Regional and Caledonia here in the MIT, and it has been that way dating back to their 6th grade year! This team is fun to Coach and has had lots of success. We were without our Big Man Russell Kingbird, who was out with an illness. The team was made up of Jimmy Jourdain, Ira Spears, Sonny Martin, Boo Chaboyea, Jalen Jones, Justice Needham Ari Mason, Alvin Wind. 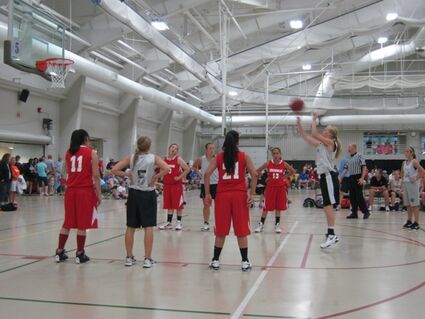 On Sunday was the 8th grade girls Minnesota State Tournament, our girls won the Regional in Crookston in April and qualified for this tournament which featured the Champions of the other 7 Regions in Mn. This was a last minute effort after I found out that the girls weren’t going, but that the entry fee was paid. Thanks to the Donations Committee fast action, we were able to get lodging reserved. We then found out that the two top scorers for the team had jumped on with the Leech Lake 9th grade girls team, however the girls still wanted to go, and we ended up with a group of three 8th graders; Taylor Lightfeather, Kristie Basswood, Taneasha Head and 7th graders; Samantha Roy, Candace Jacobs (Cass Lake) and 6th graders; Alexis Desjarlait, Khiana Roy, WesleyAnn Strong.

The Girls were a little over matched against the bigger 8th graders, but they kept playing hard against the best teams in the State, they went 0-3 on the day, but gained some good experience and look forward to making it back. I for one am proud of the direction our girls program is going, there are lots of talented players coming up and I look forward to some good season for them.

Thanks to everyone behind the scenes who help make these events happen!