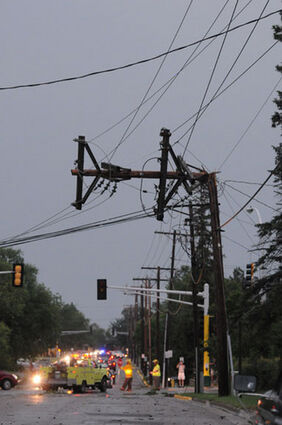 Power is still out in parts of the Bemidji area after Monday night's storm. Monte Draper | Bemidji Pioneer.

Severe thunderstorms rolled across Southern Beltrami County on the evening of July 2nd 2012, leaving widespread wind damage in the Wilton, Bemidji, and Rosby communities. Especially hard hit was Rosby where thousands of trees have been blown down as well as some structural damage. The City of Bemidji has also suffered extensive damage to utility lines and utility poles. City and County crews have been working to clear the roadways, but a major obstacle has been the large number of power lines that have become entangled amongst the severe damage.

The Beltrami County Sheriff’s Office and the Bemidji Police Department have requested emergency travel only in Southern Beltrami County. If you do not need to navigate roadways through the affected areas, please delay your travels. There continues to be a number of roadways covered by tree damage, but most major roadways have been cleared. In addition traffic control devices (stoplights) have sustained damage as well. It may be later morning before all repairs can be made. If you encounter an intersection with malfunctioning or dark stoplights do not assume cross traffic will stop. There are many uncontrolled intersections in Bemidji as of early Tuesday morning.

There are still thousands of customers without power in and around Bemidji as well as many areas that do not have phone or internet service. Utility crews have been made aware of over 100 locations that have downed lines. Despite their best efforts, it may take well over 24 hours for all customers to be restored. Please do not call the Law Enforcement Center for updates on when power will be restored. Dispatchers have been inundated with storm related calls, please reserve calls to the Beltrami County Communications Center for threats to life or property and in progress crimes.

Outdoor warning sirens were sounded in Bemidji shortly after 6:30 PM when the Beltrami County 911 Communications Center received notice of the impending storm by the National Weather Service Grand Forks Office. There were several public reports of a funnel cloud that developed four miles southwest of Bemidji, but tornadic activity has not been confirmed in any of the damage or by trained Skywarn Spotters. Emergency Management has been in contact with the National Weather Service to determine the type of storm event that affected Beltrami County. Without a complete analysis by a storm damage assessment team, the most likely cause of the damage was a strong “bow echo”.

A city-wide curfew remains in effect from 11:00PM July 2nd to 6:00AM July 3rd for Bemidji. There have been no injuries directly as a result of these storms.