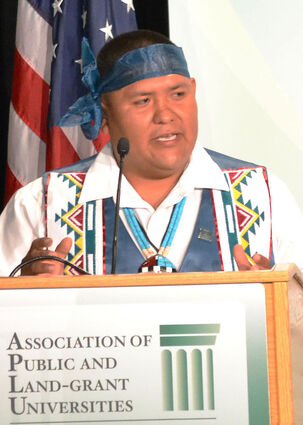 WASHINGTON, D.C.—Acting Assistant Secretary-Indian Affairs Donald E. “Del” Laverdure lauded Darwin Cajero, a student at the Southwestern Indian Polytechnic Institute (SIPI) in Albuquerque, N.M., who was a featured speaker at the sesquicentennial celebration of the Morrill Land-grant Act of 1862, this past Tuesday, June 26, 2012, at the Ronald Reagan Building and International Trade Center.

“I am pleased to see SIPI and Mr. Cajero in the spotlight with the Association of Public and Land-grant Universities (APLU) and nearly 600 public university leaders and others from government, philanthropy and business to celebrate the 150th anniversary of the Morrill Land-grant Act,” said Laverdure. “To be considered for this honor Mr. Cajero went through an extensive competitive selection process. His story is a testimony to all Native students who are actively making a difference seeking higher education and devoting their knowledge to their respective communities in Indian Country.”

The Morrill Land-grant Act was written by Senator Justin Smith Morrill of Vermont and signed into law on July 2, 1862, by President Abraham Lincoln. The legislation provided grants of federal lands to the states for the establishment of public universities and led to the democratization of higher education. The American Indian Higher Education Consortium , a national association of tribal colleges and universities (TCUs), also is celebrating the federal land-grant status of its 37 member institutions during the APLU’s national convocation. Cajero, who is serving as the TCU representative, was selected through a national competition..

“The scientific knowledge that I’ve gained has given me a wider view of our natural resources on the reservation,” said Cajero. “With education and experience I can help the tribe to address the areas of wildlife management, water quality, green energy and land use. I am grateful for my experiences and use them as a basis to mentor individuals from Jemez and students on campus—I don’t mind sharing what I have learned.”

Cajero is a tribal member from the Jemez Pueblo in New Mexico. He is the proud father of two daughters aged 14 and 10. He commutes 55 miles daily to attend SIPI where he is currently studying for an Associate’s degree in Natural Resources and a Certificate in Geospatial Information Technology. He has field experience in utilizing geospatial technology to map water resources for his Pueblo and is currently employed as an intern in the tribe’s natural resource department. Cajero is committed to pursuing his education, caring for his family, and fulfilling his traditional cultural obligations to his community as designated by his elders. He is an accomplished carpenter, homebuilder and enjoys hunting, horseback riding, and archery.

SIPI is a national Indian community college established in 1971 at the request of the 19 Pueblos of New Mexico and other federally recognized tribes in the U.S. to help train American Indians and Alaska Native for employment. It is one of 37 tribal colleges designated as 1994 land-grant institutions and is one of two post secondary institutions directly operated by the Bureau of Indian Education. It is advised by a national, tribally appointed Board of Regents. SIPI provides career technical training and transfer degree programs to students from the nation’s federally recognized tribes. It offers competitive job training programs; granting of Associate of Applied Science, Associate of Arts and Associate of Science degrees; and opportunities to transfer into four-year degree programs.

The Assistant Secretary-Indian Affairs in the U.S. Department of the Interior oversees the Bureau of Indian Education. The bureau implements federal education laws, such as the No Child Left Behind Act, in and provides funding to 183 elementary and secondary day and boarding schools and peripheral dormitories located on 64 reservations in 23 states serving over 40,000 students from the nation’s federally recognized tribes. Approximately two-thirds are tribally operated with the rest BIE-operated. The bureau also serves post secondary students through higher education scholarships and support funding to 26 tribal colleges and universities and two tribal technical colleges. In addition to SIPI, it also directly operates Haskell Indian Nations University in Lawrence, Kan.