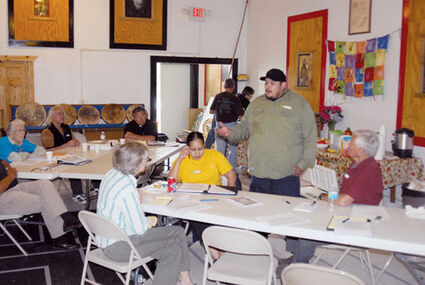 Curtis Buckanaga speaks to members of the community about the concerns he has of reservations and surrounding community life at the People’s Church Saturday afternoon. Brian matthews | Bemidji Pioneer

“I think we need to focus on the solutions and not pay too much attention to the problems. The problems are there, what are we going to do about them? That’s what we need to do, we can’t let them discourage us.

The purpose of the event was for people to have the opportunity to share their concerns of the reservations and the surrounding community life.

In doing so, a bulletin board was created, filled with areas of concern. Some of the issues addressed included poverty, racism, sovereignty, health care, affirmative action and many more.

“In my opinion I see these concerns being symptoms of very large aspects of our society,” Buckanaga said. “One major one would be poverty. I see poverty playing into the hands of a lot of people and giving these symptoms to them.

The group in attendance, which was made up of priests, pastors, native and non-native people and other leaders in the community attempted to narrow the list into three areas of focus.

The debate went in circles, with many various opinions on the wording of these focus areas, but the group settled on poverty, health and corruption as the areas that the local community needs to focus on improving.

Buckanaga said he would have liked to see more representation from members of the Leech Lake, Red Lake and White Earth reservations as well as more participation from political leaders who were unable to attend, but said this meeting is the first of many to be held to begin addressing the issues mentioned.

“I am not discouraged that this is not a well attended,” Buckanaga said. “This is the first of many events that we are going to have to bring people together. I understand how people want to see some action now but it’s going to take a little bit. You have to be dedicated to this.”