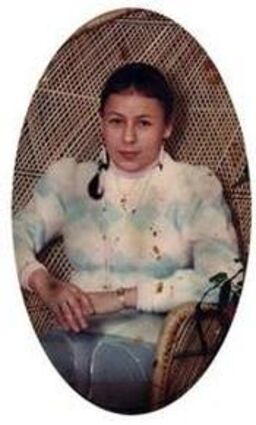 Funeral Services will be 1:00 pm Saturday, June 23, 2012 at the St. Mary’s Catholic Church in Red Lake. A wake will begin at 6:00 pm Thursday, June 21, 2012 at the Redby Community Center in Redby, MN and continue until the time of services on Saturday. Interment will be at the St. Mary’s Catholic Cemetery in Red Lake, MN under the direction of the Cease Family Funeral Home of Bemidji.

Val was born to Roman “Ducker” and Gretchen Stately on October 3, 1965. She lived in Red Lake all of her life, graduating from Red Lake High School in 1984. Val spent her life with Bryan and her sons, Josh, Brent and Trevor. She was very proud of her family and friends, and was well loved by all who knew her. She worked briefly at the RL Drug Rehab and the Reed Lake Casino before she became a homemaker. She enjoyed playing keno, bingo, yahtzee, pool and enjoyed watching her sons throw horseshoes. She loved visiting with her family and friends. Val always had an open door to those who needed a place to stay. She was especially looking forward to her first grandchild. Val and Bryan were together for over 31 years and were married on June 13, 2012. She will always be remembered for her pride in her home, her willingness to speak her mind, and most of all her love for her family.

She was preceded in death by a grandchild, mother, Gretchen Stately, grandparents, Jim and Mary Jane Brun, Roman and Rose Stately, numerous uncles and aunts and cousins, and special friend Sherry Clark.