“Fish have always been a part of our tribe. Going back several hundred years, they’ve been one of our main foods,” says Ojibwa tribal member Bill May, general manager of the Red Lake Nation Fishery in northern Minnesota. And it was his tribe, the Red Lake Band of Chippewa Indians, that spearheaded the effort to bring the culturally vital walleye back from the brink of extinction to its healthy status today.

Beginning in 1917, the now 11,000-member tribe has banded together to market walleye, which has grown into a successful money-maker with $2.5 million in fisheries revenue projected for this year. “Last year we processed 650,000 pounds,” says May of his 100 percent tribally-owned and operated fishery that plans to move into greater consumer retailing in the near future. The self-professed “oldest and largest freshwater walleye processing plant in the United States” ships fish fillets, fresh or frozen, to businesses and homes overnight via FedEx.

Walleye are wild-caught—meaning tribal anglers use the old-fashioned hook-and-line method—and hand-filleted. Under tribal resolution, according to May, members may subsistence fish for 10 walleye per day to feed their families. Anglers are also allowed to sell their excess catch to the fishery, which employs up to 90 people during season.

May, who grew up in a fish camp on the edge of the Red Lake—the sixth largest natural, freshwater lake in the U.S. after the five Great Lakes—says he’s surprised walleye took so long to become popular as table fare. But now that it has, Red Lake Nation Foods, Inc. wants to branch out with their smoked whitefish line as well as expand markets for northern pike as fish nuggets and fish byproducts as animal food. Red Lake Nation Foods currently sells cultivated wild rice, herbal teas, and wild berry jams and jellies. 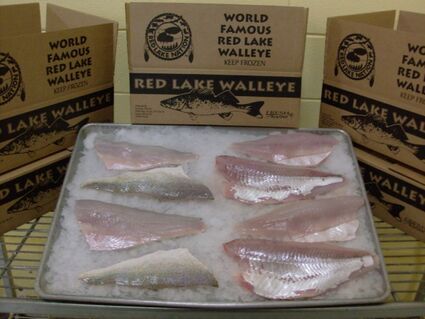 To advertise their hand-caught walleye, Red Lake Nation Fishery is serving tasting samples at the Fancy Food Show, the largest specialty food and beverage event in North America featuring exhibitors from 80 countries and regions, held in Washington, D.C., June 17-19. At the culinary event, the fishery is working with the Intertribal Agricultural Council, which created the “Made by American Indians” trademark, to help American Indian food producers promote their products.

Red Lake tribal member Bianca Mendoza offered tasting samples of the fishery’s signature smoked whitefish and pan-fried walleye in mini-fish taco form. “Our booth is always one of the most popular because of the aroma of fish cooking. People find us with their nose,” she says.

A product list, recipes and ordering instructions can be found at http://www.redlakenationfoods.com.