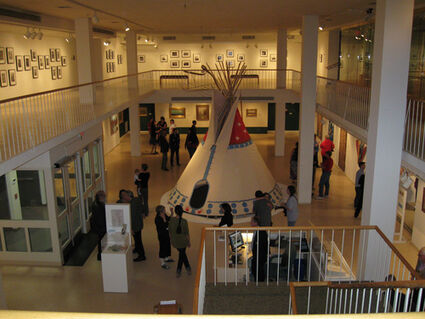 Since the word “Minnesota” comes from the Dakota words “mni sota” which have been translated as “clouds reflecting in water,” “smoky water,” or “cloudy water,” organizers named the exhibition “Mni Sota: Reflections of Time and Place.” As a traveling exhibit, the works have been viewed in four other Minnesota locations. The Tweed Museum is the location for their fifth and final showing.

“This is remarkably beautiful artwork. In this exhibition, we’re offering a wide range of works from beadwork to works on paper. The most important thing to know is that these are works that are done in a traditional fashion, but they’re also done in a very contemporary way. The craft and formal artistry is strong and the symbolism is strong,” said Ken Bloom, director of the Tweed Museum.

Duluthian Claire Kirch attended the event. She spoke to the strong symbolism she saw in the work titled “Painting Tomorrow’s Dream” by Anishinabe painter Roy Thomas. “This is so amazing to me. This is a Native American artist whose art connects to other artistic traditions throughout the world. It really spoke to me. There are certain themes and colors and ways of expressing yourself that transcend geographic divisions that really are truly universal in expression.”

Joe Horse Capture, associate curator in the department of African, Oceanic and Native American Art at the Minneapolis Institute of Art, offered comments 30 minutes into the event. He pointed out that the Tweed Museum has a great tradition of showing both contemporary and traditional art and stated that these works by tribal artists now on view in the Tweed gallery blend both traditional native and modern artistic forms of craft as well.

Melvin Losh, a master quill and bead worker, grew up on the Leech Lake Reservation. There, he learned how to build quilled birch bark boxes. He has been creating beadwork objects for over 40 years, and designing quillwork for over 35 years. For the Tweed exhibition, Losh has six quill boxes on display. He made the boxes and their decorative coverings from porcupine quills, birch bark, sweet grass and nylon thread.

“Almost any design can be put on them, if the quills will lay right. It takes me about three or four days to complete one box. It’s endless what I can do with the patterns and designs,” said Losh, whose work can now be found in private collections and museums.

Delina White is also a member of the Leech Lake Band of Ojibwe. She started doing beadwork with her grandmother at the age of six. As a girl, White would match up the beads by colors and shapes when her grandmother would give them to her for something to do. Over the years, a play activity grew into an artistic commitment. Recently, she completed a woman’s skirt.

“It was quite an endeavor. It’s taken me about seven months to get it done. I feel like beadwork is now a connection for me to my grandmother and to my ancestors. I’m really interested now in traditional arts, especially Ojibwe or woodland-style arts, so I’m always looking at books and going to museums to get inspiration,” said White.

“We’re very grateful that UMD was willing to be one of our venues,” said Reynolds-White Hawk. The exhibit is on view until August 26. Consult the Tweed Museum of Art website at http://www.d.umn.edu/tma for further information.