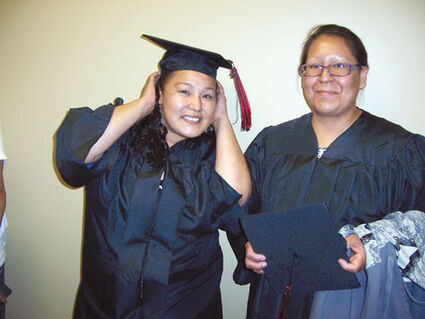 The graduates, gathered with friends and family at the Seven Clans Event Center, had dropped out of school for a variety of reasons, but they reported common goals in passing the GED test. For some, earning their degree required finishing up a month’s worth of study. For others, the accomplishment took several years.

“After the (2005 Red Lake High) school shooting, I had trouble going back,” said Marissa White. “I would have graduated in 2008. I started last fall on my GED. My daughter was my motivation.”

Samantha Redeagle, 21, enjoying the pre-ceremony feast with her husband, Mickey French, and sons, Rory, 4, and Mickey Jr., 18 months, said she earned her GED so she could go to Bemidji State University to work toward a registered nursing degree.

She said she quit school for family reasons. “My grandpa got sick, and I ended up taking care of him.”

Giamoni Parisien, 19, is a former Bemidji High School student who needed to finish his coursework at New Beginnings.

He said he planned to attend the University of North Dakota for his core work and then transfer to a graphic design school in the Twin Cities.

Damian McGraw, 27, was a Laporte High School student who transferred to Red Lake High School and had difficulties when he discovered the curriculums didn’t match.

“Then I found out I was going to be a dad, so I got a job,” he said. He worked at the Seven Clans Casino in Thief River Falls.

“When these young people came in, I saw tomorrow,” said Spiritual Leader Larry Stillday as he led the opening prayer.

Guest speaker Andy Wells, owner of Wells Technology in Bemidji, also congratulated the graduates and urged them to continue their educations.

“Even though I’m almost 70 years old, I still go to school,” he said. “The only mistake you make is when you quit.”

Wells, a Red Lake Band enrolled member, said when he was growing up on the western side of the Red Lake Nation, running trap lines and coming home to the family farm to milk cows, he could never have foreseen being the owner of a successful manufacturing company. He said his company needs skilled employees and could hire five immediately if they had the qualifications.

However, his final words to the graduates were encouragement to reach out and help others: “When you do good things, good things come to you.”