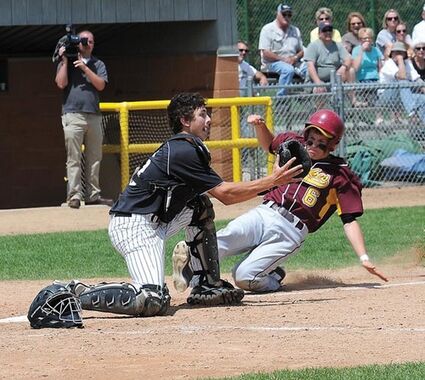 Blackduck’s pinch runner Colton Bales scores on a play during the third inning as Red Lake County’s catcher Wyatt Casavan tries to block the plate during playoff action on Tuesday afternoon. The Drakes won the game 6-5 with a walk-off single in the ninth inning. Monte Draper | Bemidji Pioneer

BEMIDJI — Another pitcher might not have returned after giving up four runs on five hits in the sixth inning.

But this was Aaron Nissen, and this was the Section 8-A playoffs.

“He’s our rock,” Blackduck head coach Dwight Kalvig said. “He’s the leader of men. I can’t say enough about what he’s done for this team this year. We really count on Aaron to set the tone and he did that today.”

Although Nissen committed an error and allowed Red Lake County to take the 5-2 lead in their Section 8-A semifinal game Tuesday at Bemidji State, the Drakes evened the score with three runs of their own in the bottom half of the inning.

That allowed Nissen to come back in and throw two more solid innings — which, in turn, gave Blackduck’s Cody Bergquist a chance to be the hero.

The senior lined a one-out single up the middle in the ninth inning, giving the Drakes the 6-5 win and sending them into Thursday’s championship game.

Nissen wasn’t happy with himself after the Rebels (15-10) took the lead in the top of the sixth. Four hits in the inning were solid groundball singles. The one that wasn’t ended up costing the Drakes an extra run.

Wyatt Casavan’s squeeze bunt would have broken the 2-2 tie and scored Garrett Schmitz from third regardless. But when Nissen fielded the bunt and threw to third base, nobody was covering the bag due to the bunt, and the ball bounced harmlessly into left field. Joe Berberena raced around third and scored easily, giving Red Lake County the 4-2 lead.

A Scott Schultz single scored Casavan and added another run before Nissen got the final out of the inning, making it 5-2.

Nissen tried not to dwell on the inning.

“I was just thinking that I wasn’t going to let them get into my head, no matter what,” Nissen said.

After that half-inning, Kalvig gathered his team around him on the grass.

They sure did. After a strikeout to kick off the inning, the next four Drakes reached base. Bergquist singled scored on Trey Volk’s single.

Nissen followed Bergquist and walked; and both Nissen and Volk came around to score on Dylan Weisert’s single.

“We knew we were going to be in a tight ballgame,” Kalvig said. “We just told the kids, relax, believe in yourself and everything’s going to be okay.”

Nissen came out for the seventh inning and shut the Rebels down with a pair of strikeouts and a routine flyout. When the Drakes couldn’t end it in the seventh, Nissen went out for the eighth, too. Despite giving up a leadoff walk that eventually reached third; he struck out two more hitters to get out of the jam.

“I was tired, but I didn’t want to let them down,” Nissen said. “I was just trying to throw as long as I could to get us into the title game.”

When the Drakes threatened but didn’t score in the eighth, Weisert came in to pitch the ninth and retired the side.

That set everything up nicely for Bergquist, who pitched a gem in the East Sub-Section final against rivals Cass Lake-Bena.

After Jake Krabbenhoft singled and Matthew Patch walked, Bergquist lined a fastball over the second base bag to drive in the winning run.

“Before I hit, I said I wanted to end it,” Bergquist said.

Nissen was glad his teammate got the drive.

“I had total confidence in him,” he said. “I knew he was going to find a gap somewhere and pull it through for us.”

Nissen didn’t get the decision but gave up five runs on seven hits.

Red Lake County starter Joe Berberena only went 4 1/3 innings. He gave up only two runs on three hits before exiting the game in the fifth inning. Dylan Zutz took the tough-luck loss for RLC.

“Since the subsection final, all we’ve been talking about at practice is being ready to play against the cream of the crop,” Kalvig said. “And that was our mindset today.

“It was a wonderful game for the boys, I’m so proud of them.”

The Drakes now get a rematch with the Rebels, but the Rebels will have to beat the Drakes twice — something no team has done this season.

Still, they won’t get cocky. They know they have to stay hungry – especially after losing twice last year and missing out on state. The Drakes lost to Norman County in the first game last season; Red Lake County ended up winning the section and advancing to state.

“It’s been a long time since Blackduck’s gotten here,” Bergquist said. “So this is awesome. It’s taken lots of hard work.

“Last year we were satisfied. We’re not satisfied now. We want to go to state.”