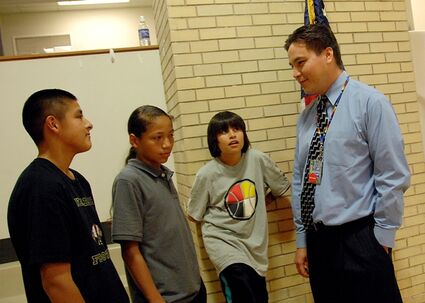 Acting Assistant Secretary-Indian Affairs Del Laverdure gives some pointers to a few of the kids that attended a basketball clinic at the Department of the Interior, which was part of the Let’s Move! in Indian Country One-Year Anniversary event held earlier at the Dwight D. Eisenhower Executive Building.

WASHINGTON, D.C. — Acting Assistant Secretary-Indian Affairs Donald “Del” Laverdure today participated with the White House Senior Policy Advisor for Native American Affairs Jodi Gillette to moderate a panel of leaders from across Indian Country in celebration of the contributions made to the First Lady’s Let’s Move! in Indian Country (LMIC) initiative. The event, in honor of the one-year anniversary of the program’s launch, was streamed online at http://www.WhiteHouse.gov/live.

“One year ago the Office of the First Lady’s Let’s Move! initiative and four federal agencies launched Let’s Move! in Indian Country,” Laverdure said. “Through Let’s Move! we are supporting and advancing the great work that tribal leaders and community members are already doing to improve the health of American Indian and Alaska Native children. Today we were privileged to hear first-hand the wonderful progress being made across the country by our extremely accomplished panelists.”

White House Office of Public Engagement and Intergovernmental Affairs Associate Director Charlie Galbraith welcomed all those viewing the webcast as well as those watching it in person at the White House. President of the National Congress of American Indians Jefferson Keel provided the invocation, followed by brief opening remarks made by Secretary of Education Arne Duncan.

As a part of First Lady Michelle Obama’s Let’s Move! initiative, LMIC brings together federal agencies, communities, nonprofits, corporate partners and tribes to end the epidemic of childhood obesity in Indian Country within a generation. A key component of the Let’s Move! in Indian Country focuses on four pillars that are essential to building a healthy future for American

• Creating a Healthy start on Life,

The featured panelists have demonstrated success in one or more of these pillars and shared their stories with the moderators and those viewing in Indian Country on the live-stream. Also in attendance at the discussion was Senior Policy Advisor for Healthy Food Initiatives and Assistant White House Chef Sam Kass.

The following panelists’ brief biographical statements are listed below:

After a successful collegiate running career Alvina has finished in the top 10 in six U.S. road Championships, represented the U.S. internationally and finished 10th in the ING New York City Marathon. Alvina recently qualified for the Olympic Trials in the 10,000 meters.

Jack is a member of the N7 Fund Board of Directors. Along with Sam McCracken, the General Manager of N7, he was one of many who helped develop the N7 program to bring sport and all of its benefits to Native American and Aboriginal communities in the U.S. and Canada.

Carl is an AmeriCorps VISTA leader for the Mino Bi Ma De Se Win (Return to the Good Life) Farm. The garden project works to ensure sustainability by encouraging tribal members to play an active role in the development, management, and production of a local food source.

Gardening is a family tradition for Lise, who serves as the school health officer at Circle of Nations School in North Dakota. She works to encourage healthy choices through the school’s “Green & Growing” local sustainable food project. She is also an accomplished author having written award-winning books for young readers, including her acclaimed work, Sacagawea.

Cherokee Choices is a diabetes prevention program that confronts the factors which put Cherokee people at higher risk for diabetes. The program provides social support to increase physical activity and promote well-being to reduce the risk for obesity and diabetes.

(IHS), Clifton has worked to implement the ‘Ten Steps to Successful Breastfeeding.’ This initiative will lead to the full accreditation for the first IHS hospital (Rosebud) in July of 2012.

Leatrice is a co-founder of the Zuni Wellness Center and worked as the Program Manager for fifteen years. Today, she continues her work in tribal wellness and serves as a wellness consultant to Indian tribes and other indigenous groups.

Since his retirement from the US Navy after deployment to Iraq, Crispen has been focused on improving the health and well-being of his community. He recently participated in a 230 mile run across the Karuk Ancestral territory to inspire Native Americans to make healthy choices.

Bruce helped introduce the Badges for Baseball program to the Menominee Tribe. Recently, he carried out an initiative to bring a grocery store to the reservation by opening the Keshena Save-A Lot which sells fresh produce and provides healthier dietary options to the Menominee people.

After an outstanding college basketball career at the University of Nevada Reno, Tahnee became the first American Indian woman drafted by the WNBA. She has since played professional basketball in Israel and is contracted to play her next season in Bulgaria.

Closing remarks were made by Assistant White House Chef Sam Kass about the wonderful progress being made through healthy nutrition and diet. Museum Cultural Specialist at the Smithsonian National Museum of the American Indian Dennis Zotigh provided a closing song to end the events of the live-stream discussion. Following the discussion, two of the panelists, professional basketball players Ben Strong and Tahnee Robinson, lead a group of Native American youth through a basketball clinic.