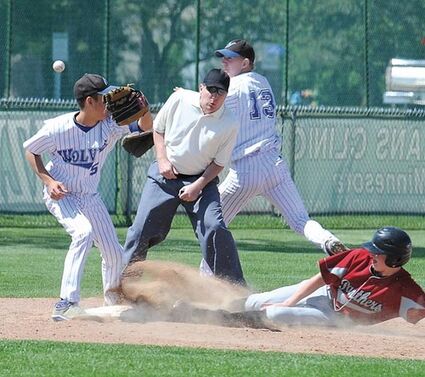 Cass Lake-Bena pinch runner Sebastian McFadden slides safely into third base as WHA’s James Kellogg has a difficult time fielding the throw during the fourth inning of Thursday’s sub-section semifinal. The Panthers beat WHA 4-2 but fell in the title game against Blackduck. Monte Draper | Bemidji Pioneer

BEMIDJI – The Blackduck Drakes brought their bats to the Bemidji State baseball diamond Thursday. They came home with their second-straight Sub-Section 8A East title.

The Drakes combined to score 23 runs on 19 hits in two games of the sub-section tournament and cruised to a pair of wins against Kelliher-Northome and Cass Lake-Bena.

The 12-4 win in the title game against rivals CL-B (12-10) marked Blackduck’s second-straight championship. But the Drakes (20-3) don’t want to stop there.

“It feels great to win this two years in a row especially, but we lost our next game last year,” Drakes centerfielder Trey Volk said. “I don’t think we’re done yet.”

The Panthers will play Sacred Heart in an elimination game Tuesday at 2:30 p.m.

On Thursday against CL-B, Volk and Cody Bergquist each notched three hits against a Cass Lake pitching staff that had little help from its defense, which committed six errors.

“We took advantage of the defense they played,” Blackduck head coach Dwight Kalvig said. “We didn’t waste our opportunities. That’s the key to how you win tournament baseball this time of year.”

The Panthers committed six errors despite getting 12 base hits off Drakes starting pitcher Bergquist. They just couldn’t capitalize on their opportunities.

“We hit well, but when you commit six errors, you aren’t going to win many games,” CL-B head coach Kenny Wittner said. The Panthers had 12 hits to the Drakes’ 11 but only scored four runs.

“The runs they scored I walked a couple batters,” Bergquist said. “But our defense is good. They get a hit and the guys out there are going to make the plays.”

Bergquist helped his own cause at the dish, reaching base four times, singling three times and driving in three runs.

Volk went 3-for-5 with two runs scored, including a monster solo home run to left in the third inning that kicked off a marathon six-run frame for the Drakes. Blackduck was up only 3-2 before Volk sparked the big inning; Bergquist had given up two runs on four hits in the top half of the third.

“I’ve kinda been struggling lately,” Volk said. “I was just eager to jump on a pitch. And he gave me a pitch to hit and I sent it.”

Blackduck’s six-spot in the third put the Drakes up 9-2. Although the Panthers scored twice more in the top of the fifth to cut into the Drakes’ lead, Blackduck put it out of reach with a three-run bottom of the fifth.

Wesley Moe started and took the loss for the Panthers. Caleb Fisher and Nic Rairden also pitched in relief for CL-B.

Aaron Nissen struck out the side in the top of the seventh to help the Drakes hold on.

“It’s always nice to get an opportunity to play Cass Lake,” Kalvig said. “They’re very well-coached and I have a lot of respect for them. But we just came ready to play ball today.”

In Thursday’s sub-section semifinals the Drakes downed Kelliher-Northome 11-1 and the Panthers nipped Walker-Hackensack-Akeley 4-2.

Blackduck spotted the Mustangs a 1-0 lead in the top of the first when Nate Anderson bunted for a single and eventually scored on Joey Schuh’s single.

The 1-0 score continued until the third when the Drakes took control with four runs. With one out, Bergquist and Shane Fenske delivered RBI singles, Lucas Krabbenhoft plated a run after being hit by a pitch and the fourth run crossed the plate courtesy of an error.

In the Blackduck fourth Matt Patch was hit by a pitch and eventually scored on Aaron Nissen’s single.

Blackduck used a pair of singles, a series of walks and Bergquist’s 2-run single to plate five runs in the fifth and a pair of errors enabled the Drakes to score the game’s final run in the sixth.

Nissen want the distance on the Blackduck mound to earn his sixth victory in seven decisions. Lance Pink took the loss for Kelliher-Northome.

Wesley Moe pitched a four-hitter and drove in a pair of runs to lead the Panthers past Walker-Hackensack-Akeley in Thursday’s second semifinal.

Cass Lake-Bena opened the scoring in the first inning when Jake Fisher doubled and Moe drove him home with a single.

The Panthers upped their advantage to 4-0 in the fourth as Ryan Erickson was hit by a pitch, gained second on a passed ball and scored on a throwing error.

WHA made things interesting in the upper sixth as the Wolves turned a walk, a single, two errors and a sacrifice bunt into two runs.