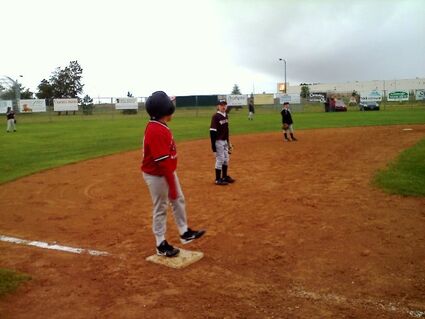 It was a cold, rainy evening and pitchers from both teams had trouble finding the strike zone. But early on in the 1st inning starting pitcher Aaron White was able to shake off a lead-off walk and strike out the next 2 out of 3 batters and got the other out on a pop up. Red Lake’s home half of the 1st started with back-to-back singles by lead-off man Chase Cobenais and Rob Beaulieu. Cobenais scored on Beaulieu’s single and who then scored on Austin May’s double. Aaron White hit a 2 out triple to bring in May to give Red Lake a quick 3-0 lead after one.

1st National Bank was able to put together a 2 out rally and scored 3 runs in the visitor’s half of the 2nd. In Red Lake’s half of the 2nd, after back-to-back singles by Tyler Brown and Dion Thunder, Cobenais brought them in on his second hit of the game. Cobenais was able to score on Beaulieu’s triple, who then scored on May’s single. Aaron White and Riley Chaboyea also scored after walks putting the score at Red Lake 10, FNB 3 after two innings.

Jaden Wood came in to relieve White in the 3rd and was able to set FNB down in order. The weather played a big factor in Red Lake’s 3rd inning and FNB’s pitcher was unable to get a grip on the wet ball where Red Lake was able to score 9 runs due to walks while only getting 2 hits, putting the score at 19-3 after three innings.

In the 4th, Red Lake’s pitching experienced what FNB was going through in their half of the inning and not being able to get a grip on the ball. FNB was able to get 7 runs of their own on walks and only one bases-loaded double. 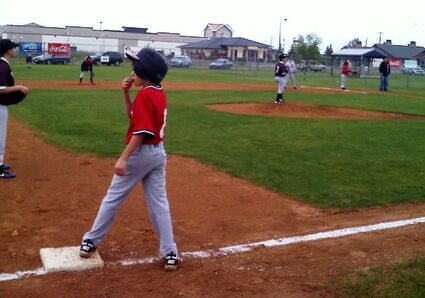 Red Lake was able to put the game away when Riley Chaboyea scored on a Wood double. Trent Head and Jaden Wood were then able to score on single by Cobenais. Cobenais scored on Beaulieu’s 2nd triple of the game, making the final score Red Lake 23, 1st National Bank 10.

Red Lake’s offense was lead by lead-off man Chase Cobenais who went 3 for 3 with 2 walks, 4 RBI’s and 4 runs scored. Rob Beaulieu III went 4 for 4 with 2 triples, 4 RBI’s and 3 runs scored. Austin May and Riley Chaboyea scored 3 runs each and Aaron White scored 2 runs and had an RBI triple.

The team would like to thank the Red Lake Housing Authority Board of Directors for their generous donation for league fees & equipment and the Red Lake Chemical Health Programs for providing transportation.