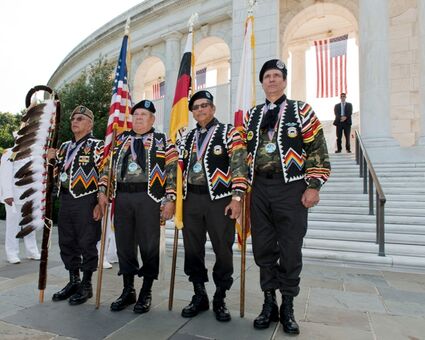 John Harrington for the Seminole Tribe of Florida

About two dozen service organizations were invited to participate in the National Memorial Day Observance. According to Bowers, a founding member of the Seminole Color Guard and a Vietnam War combat veteran, Seminole Tribe participation marked only the fifth time since Arlington National Cemetery was established in 1864 that an American Indian Color Guard posted the colors there. The invitation came from the U.S. Army, which manages Arlington National Cemetery.

“It is a great honor for our Color Guard to post the colors at Arlington National Cemetery,” said Bowers. “We are proud to represent our Native American brothers and sisters, especially those who have served with distinction in so many U.S. wars.”

Known as the Seminole Tribe Veteran Memorial Initiative Color Guard, the 4-person team is spearheading an effort to add a sculpture of a Native American soldier to the statues of Three Servicemen at the Vietnam Veterans Memorial in Washington, D.C. Per capita, more American Indian warriors served in Vietnam than any other ethnic group. Supporters of the project say the addition of an American Indian would correct an oversight that has existed since the Vietnam Veterans Memorial opened in 1982 and the Three Servicemen statue was added in 1984. The Vietnam wall will celebrate its 30th Anniversary in November, and has over three million visitors every year.

The first burial at Arlington National Cemetery took place on May 13, 1864, when William Henry Christman of the 67th Pennsylvania Infantry was interred, one month before the property was appropriated as a military cemetery. The 624-acre cemetery honors fallen men and women who have served in the U.S. Armed Forces. On average, 27 funerals are conducted each day, and more than four million people visit the cemetery each year.