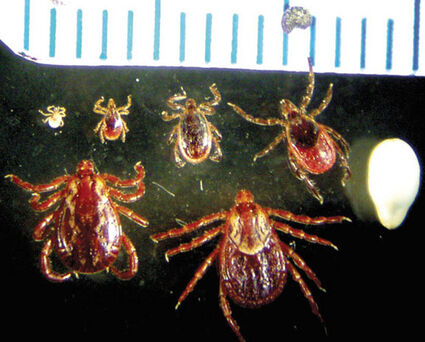 Deer ticks and dog ticks are shown above. From left in the top row are deer tick larvae, nymph and adult male and female ticks. Below are adult male, left, and female dog ticks. A poppy seed is pictured above on a metric ruler to show scale; a sesame seed is shown on the right. Photo courtesy patrick guilfoile

BEMIDJI – A record-high 1,293 cases of Lyme disease were reported in 2010 in Minnesota, where Gov. Mark Dayton proclaimed May as Lyme Disease Awareness Month.

Minnesota is considered a high-risk state for Lyme disease, which is carried by the Eastern black-legged tick, or the deer tick. Ticks survive our harsh winters and become active when the temperature reaches 38 degrees.

Lyme disease was first recognized in the United States in 1975 when an unusual outbreak of arthritis occurred near Lyme, Conn. The disease is most prevalent in the Northeast and the upper Midwest.

Deer ticks are smaller than the common American dog tick, what Minnesotans often call the wood tick. The deer ticks can be even smaller yet when they are in the larvae or nymph stages. Male and female deer ticks differ in both size and appearance.

Patrick Guilfoile, an interim associate vice president at Bemidji State University with a doctorate in bacteriology, said people are more likely to be bitten by ticks in the nymph stage.

“There’s pretty general consensus that a tick has to bite for a day or a day and a half to cause Lyme disease,” he said, noting that this is more likely to happen with the nymphs because they are quite small, about the size of a poppy seed.

“The nymphs are generally active from May to the end of June or beginning of July,” Guilfoile said, but with a warmer spring this year, deer ticks were seen as early as March.

Guilfoile, author of the 2004 book “Ticks Off! Controlling Ticks That Transmit Lyme Disease on Your Property,” explained that people tend to be bitten by ticks on their own property, so one of the best ways they can avoid being bitten is to reduce the ticks’ habitat.

“Ticks are very hardy, but they’re quite sensitive to drying out,” he said. “A lot of the steps people take to reduce tick habitat are to reduce moisture.”

Keeping lawns clear of leaves is one example that Guilfoile said is very important, as ticks get moisture beneath the leaf litter. Also helpful are mowing lawns and putting a barrier such as gravel between a grassy area and a lawn.

Harder to control is the deer population, he said, but a fence high enough to exclude most deer could potentially reduce the number of ticks in an area.

“Twenty years ago, deer ticks were very uncommon in this area,” Guilfoile said. “Part of it is probably that we’ve had milder winters in the past decade.”

Now, he said, “southern Beltrami County is one of the hot spots” as a high-risk area for Lyme disease.

Guilfoile said the increase in deer ticks is potentially an example of what can happen as part of climate change.

“There’s a lot of concern about infectious disease in general,” he said. “The concern is that as a lot of the world gets warmer, there could be a lot of diseases we’re not used to. Lyme disease is an example of what we could face down the road as temperatures warm.”

E When walking, stay in the center of trails and don’t sit on fallen logs or lean on trees.

“It looks very fashionable,” Guilfoile joked, “but a lot of people tuck their pants legs into their socks to make it a little harder for the tick to get to your skin.”

People even sometimes use duct tape, he added.

E Use insecticide, which kill ticks, and repellant, which discourages them from attaching. “DEET is considered pretty effective at repelling ticks,” Guilfoile said. Spray insecticide on clothing before dressing.

E Remove ticks with fine-tipped tweezers, grasping the tick at the surface of your skin. Pull the tick straight up and out. Do not twist or jerk the tick.

Some symptoms of Lyme disease are a fever, rash, severe fatigue, facial paralysis and joint pain. Some people with Lyme experience a reddened circular mark within another circle.

A deer tick bite can cause more than one disease. Co-infections such as anaplasmosis, ehrlichiosis, babesiosis and others can occur on their own or in concert with Lyme disease.