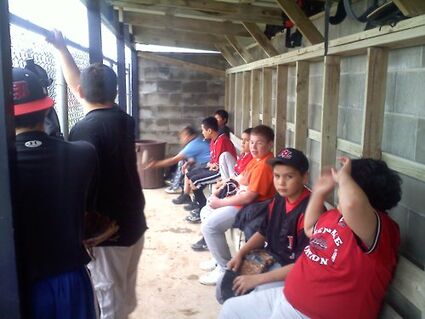 Red Lake opened the 2012 Bemidji Youth Baseball League season the way they left it last season; with another exciting win as they beat Subway 6-5.

The visiting Red Lake team started the offense early when lead-off man Jaden Wood walked to start the game and scored on an Austin May single, which was the lone run for both teams. Starting pitcher Pat Tahahwah, Jr. struck out the first 3 batters in the home team Subway’s half of the 1st inning.

After Cole Cobenais & Chase Cobenais each led off the 2nd inning with a walk, Riley Chaboyea was able to bring in Cole on a sacrifice. Chase Cobenais would score on an Aaron White triple with one out. White would then score on an Austin May double along with Wood, who walked, to put the score at Red Lake 5, Subway 0.

The score would remain 5-0 until Subway was able to get a run off Tahahwah in the 3rd inning. Tahahwah would be relieved by Trent Head, but not before he struck out 4 batters in 3 innings of work.

In the 4th inning Red Lake was able to get an RBI from Tom May when Beaulieu scored, but Subway was able to score 3 runs off Trent Head after some costly walks and errors by the defense on a bases clearing double by Red Laker Jared Brown to make the score Red Lake 6, Subway 4.

After Head worked himself into a bases-loaded, nobody out jam in the 5th, Austin May came on in relief to limit the damage to 1 run while he struck out 3 of the 4 batters he faced in the tense inning. 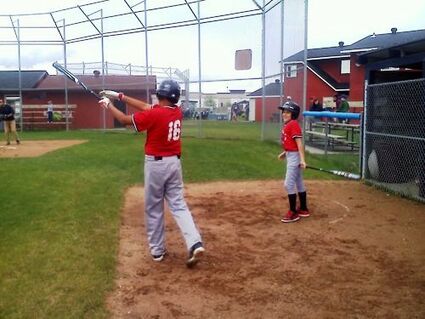 With Red Lake unable to capitalize on a bases-loaded situation in their half of the sixth, Subway was once again able to load the bases themselves. But May came thru once again when it mattered the most and struck out another 3 batters, giving him 6 K’s in 2 innings of relief and Red Lake a 6-5 victory. It was their 4th straight win going back to last season’s 3 game winning streak to end the 2011 season.

Red Lake was led offensively by Rob Beaulieu who went 2 for 4 with a run scored, Austin May 2 for 3 with 2 RBIs, Jaden Wood 1 for 3 with two runs scored and Aaron White 1 for 2 with a triple, one run and 2 RBIs

RLYB hopes to remain hot as they face 1st National Bank on Tuesday, May 29th. Practice is set for all who are interested on Monday, May 28th at 3pm at the Red Lake ball fields.

The team would like to thank the Red Lake Housing Authority Board of Directors for their generous contribution that makes our season possible.