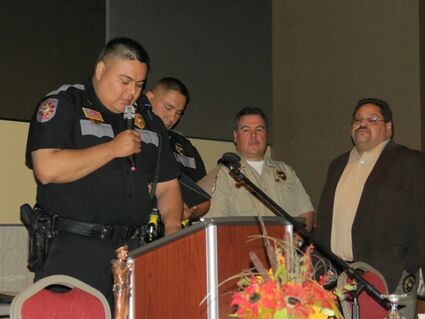 A lot of people have a lot of different feelings towards the Red Lake Public Safety Department and the Red Lake Fire Department, but one thing is for certain, if you need help, you will count on them to help you. And being a police officer or a fireman is one of the few jobs where they risk their own lives every day to protect and serve the people of the Red Lake Indian Reservation.

In appreciation of these sometimes thankless jobs, on Tuesday, May 15, 2012 an awards and appreciation banquet was held at the Seven Clans Casino Events Center in their honor.

“Your role in the community is a very, very important one,” Chairman Floyd “Buck” Jourdain said in his speech. “And there’s not a day that goes by that you are not appreciated. I mean everybody, the people who are EMTs, the people that that work in detention services that no one ever sees, the police officers who are out there.”

Chairman Floyd “Buck” Jourdain said the people of Red Lake appreciated the services of law enforcement and the fire department.

“On behalf of the Tribal Council, I just want to say thank you for your service and everything that you do,” Chairman Floyd “Buck” Jourdain stated in his speech. “These are some nice looking awards here—I didn’t see the hats on them—they look like Grammys or something.”

Jourdain was referring to the awards that would be presented to law enforcement and conservation officers.

“Thank you for the tobacco, I appreciate your services and the best to your families, and keep up the good work,” Jourdain said in his conclusion.

William Brunelle, Red Lake Director of Public Safety and Fire Department Administrator, thanked everyone for taking part in the celebration, supporting and honoring of the police and fire departments, and said he was extremely fortunate for having a wonderful, efficient and professional group of people to work with. They were local Warriors.

“These great men and women are empowered towards protecting lives, natural resources and property of the Tribes each day,” Brunelle said. “These individuals have stepped up to that call to duty, knowing full well, that when they respond to someone’s call for help, or respond to even a fish violation, or fight a fire, they know in their minds that there is going to be risks involved. Yet they respond without hesitation, knowing that their loved ones may never see them again.”

He said these individuals were daring, courageous, competent and extremely proud people, who went above and beyond on a daily basis.

Brunelle also acknowledged the dispatchers, the jail personnel and all other support services within the department.

Chairman Jourdain also presented the department with a sketch painting of a Maqua (bear).

Officer Paul Smith was recognized for being a Top Gun in the Novice Division for firearms, and Corporal Justin Nelson was awarded Top Gun in the Expert Division, receiving a score of 691 out of a possible 700 points.

Corporal William Branchaud also received a Medal of Valor Award for an incident that happened involving a felon who had a violent history that had a gun during a domestic call. 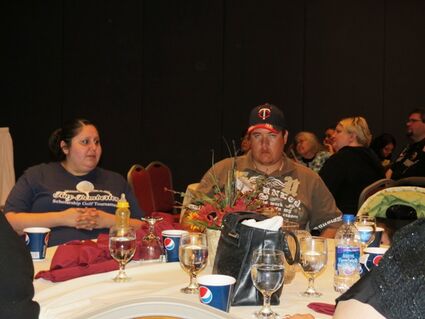 Officer Guadalope Y’barra, Captain Dana Lyons, Firefighter Michael Sams and Officer Harlen Johnson were recognized with a Life Saving Award and Medals of Valor for an incident in 2011 involving a house fire, where these individuals saved the life of a Red Lake woman that was found unconscious in the burning home.

In closing, Brunelle said they had some very good law enforcement and fire departments that operated on the reservation, and he was very proud and honored to work and supervise both departments.