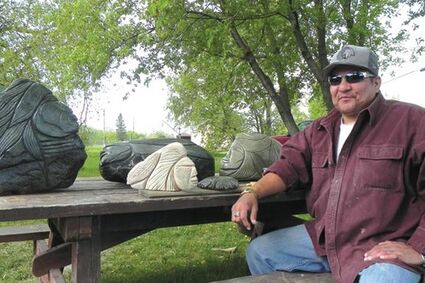 Stone carver Tim Stone is shown by a collection of his sculptures at his studio in Cass Lake.fdsdf Patt Rall | Bemidji Pioneer

BEMIDJI – Although a new artist for the Bemdiji Sculpture Walk this year, Timothy John (Tim) Stone has had his work featured at all of the area reservations as well as in others across the continental United States.

He has his works at seven different Minnesota locations like Itasca State Park and Red Wing Lodge in Leech Lake. Samples of his work are also located in the Sanford Bemidji Medical Center main entrance lobby, just inside the front door of the Palace Casino Hotel in Cass Lake and on a gravestone in a local cemetery. The biggest piece Stone has done so far is an eagle catching a muskie, currently displayed out front of the North Country Trading Post in Bemidji.

Stone, who resides in Cass Lake, said he remembers that his foster father was the first one to notice his artistic talent and bought him a drawing pad and colored pencils. Stone sketched a picture of his foster mother, which amazed his foster father, who then took him to a local well-known artist, R.D. Hayes. Hayes agreed and encouraged the young teen. After Stone left his foster family, he finished high school at the Center School in Minneapolis, a Native American institution.

“I lived with my foster parents for seven years – from 7 to about 14 – and I had everything,” said Stone. “They were loveable parents whose own children had grown up and left when they took me in. I had a good childhood with them and had everything. My dad was German and my mother was Norwegian. I loved them and they loved me, but I had to leave to find my own way as a Native son.”

Like many Native American men, Stone tried to connect to the traditions of his people. Some of Stone’s earlier works are more than 1,000 pieces of wood carvings of totem poles with chiefs and eagles and almost 3,000 wood burning pieces.

Today he says he is a man connected to his inner self though the medium of carving stone with native chiefs, eagles and nature’s creatures.

“I just go along the shore line and pick up stones that I like,” said Stone. “I just put them on the worktable and use a diamond drill and they (different faces and animals) just come out. I offer tobacco in the four directions in thanks because I am taking away from Mother Earth.”

Stone said he is hoping to go to college some day and get a degree in art, likely at one of the tribal colleges in the area. Stone, an enrolled member of the White Earth Band of Ojibwe, said he never asked for grants or anything from the tribes and is proud that he has succeeded on his own by approaching various people and tribes.

“I read in the Bible one time, that only God can take a rough stone and turn it into something beautiful,” said Stone. “When I read that, it reminded me of myself because if I can pick up a stone and carve something there is meaning to it.”