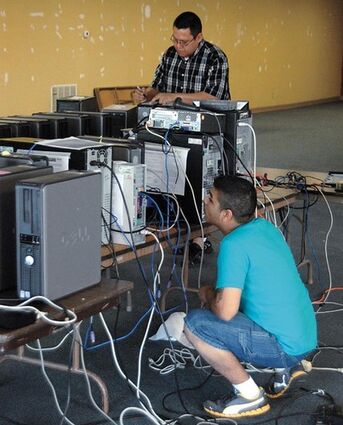 BEMIDJI - With today’s digital age, having a computer is becoming as essential as a kitchen sink, but the cost for the technology is high and some people are unable to afford their own.

To help with this problem, the United Way of Bemidji Area partnered with PCs for People, a nonprofit organization that collects and refurbishes used computers for seniors and low income individuals.

Bemidji was one of 10 Minnesota communities to participate in the mobile refurbishing project, which is funded by the Blandin Foundation and the American Recovery and Reinvestment Act.

With the help of the United Way, PCs for People set up a donation location at Asgard Computers in Bemidji and with the help of various businesses and community members, the project collected 88 computers.

“This is a win-win for businesses needing to manage their end of life cycles digital assets in a cost-effective way,” Executive Director for PCs for People Casey Sorensen said. "Not only are businesses receiving valuable data wiping and hardware recycling services for free but it’s in way that benefits their local community.”

PCs for people worked with the United Way and other community organizations to identify the low-income families and individuals who would benefit from a personal community.

Each computer is installed with the latest edition of Microsoft Window and software including education games, OpenOffice, and security and antivirus software.

In addition to the computers, Sanford Health is donating a 1-gigabyte memory stick with each computer to allow.

PCs for People computer technicians Scott Lumbar and Christian Rugel have been working on the computers since Wednesday night and are scheduled to work until their deadline, preparing the 88 computers. Hill’s Plumbing and Heating donated the work space for the two to work.

Rugel said that each computer is a unique project, which causes some computers to take longer than others.

“Even though they look exactly the same they could be off by a little model number,” Rugel said. “We will definitely put our hours in working on these.”

The computers will be done by Saturday, when people who have qualified to receive a computer will come in, receive brief instructions on the computer and be on their way.