May, Lussier will face each other in run-off in Red Lake 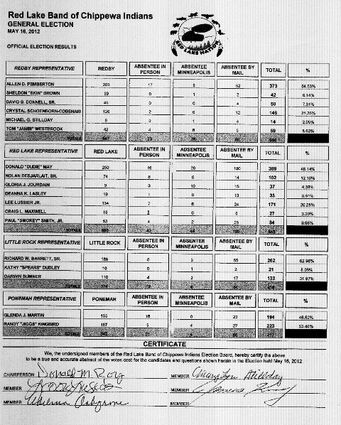 It was Election Day on Wednesday, May 16, 2012, and unofficial results reported by Lakeland News revealed Randy "Jiggs" Kingbird defeated incumbent Glenda Martin in the Ponemah Representative race by 29 votes. There were just two candidates running in Ponemah.

In Red Lake, the two top candidates were incumbent Donald "Dude" May and challenger Leland Lussier Jr. will face each other in a run-off, as neither gathered 51% of the vote, out of a field of seven candidates.

Official results will be published once they are certified by the Red Lake Election Board, along with the numbers.