Brunelle, Wind do what is necessary to return to state meet 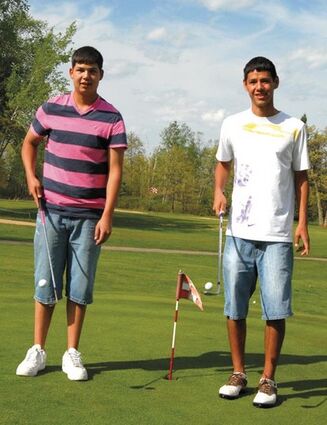 Cass Lake-Bena golfers Dakotah Brunelle, left, and Cody Wind have been leading the Panthers this year. The two have been ranked in the top 10 in Class A for much of the season and are currently tied for third in the state. Jack Hittinger | Bemidji Pioneer

The Cass Lake-Bena duo has been ranked in the state’s top 10 in Class A for nearly the entire season. And although both Brunelle and Wind — tied for third in the state as of May 12 — are hesitant to talk too much about themselves, their CL-B coaches say the two are all business when it is time to compete.

“We’re more determined than probably all the other teams,” assistant coach Levi Brown said. “That’s the reason why they’re better. They spend so much time chipping and putting. They’re kind of serious about it.

“For most kids this age, golf is just a hobby. But these guys, they really want to get better.”

Brunelle was ranked No. 1 in the state for the first time last week, but he’s been winning consistently ever since he picked up the golf clubs in seventh grade.

“That’s the first time I ever got that high,” Brunelle said. “Last year the highest I got was five, I think.”

But now, with a teammate in Wind who might be his equal, coaches around the state are finally taking notice of CL-B. Both seniors plan on playing golf at St. Cloud State next season.

“I don’t think it’s happened ever,” Brunelle said of seeing two Panthers in the state rankings. “I think this is the first time. It brings more confidence to the rest of our team.”

CL-B head coach John Kirk, who has been coaching both golfers since the seventh grade, agrees.

The Panthers may be best-known around the state for their basketball program (of which Brunelle and Wind are also members). But the golf team is turning heads thanks to its success against bigger schools around the state.

“It’s kinda cool,” Wind said. “We’ve had success, but this program is probably better than the basketball program right now.”

Earlier in the year the Panthers played at the Park Rapids Invitational and finished 10th. But they were the smallest school in a field that featured Bemidji, Moorhead and Detroit Lakes. Wind finished second overall in the tournament and Brunelle third.

“We’ve played pretty well against most 2A and 3A schools,” Kirk said. “When you go up against those guys, that’s pretty good.”

Brunelle and Wind both currently sport identical 74.7 averages and Kirk said the two are adept at motivating each other.

“I’ll ask them what they’re going to shoot today, and one of them will say 72. The other will say, I’m going to shoot 69,” Kirk said. “They’re kind of playing off each other. This year it’s gone back and forth.”

Wind went to state last year and finished 15th. Brunelle missed the state tournament after qualifying as a sophomore. You can bet it’s something he’s thought about.

“I went two years ago,” he said. “Last year I made the all-state team, which was pretty cool, but I want to go back down to state and win it.”

His key to consistency this year? Just keep playing, no matter what happens.

“I was just trying to stay positive and confident,” he said. “Last year I was getting too down on myself when I hit bad shots. This year I’m staying a lot more confident.”

The 2011 section tournament was one of only two last year that Brunelle failed to win.

“I was pretty bummed out this offseason,” he said. “It motivated me to work harder, practice every day.”

“We get out there a lot and work,” he said. “And we have good coaching too. Basically, we just want to win. And you’ve gotta practice to get better.”

Brunelle and Wind are the only two seniors on the young Panther team that also includes junior Caleb Duoos and sophomores Angel Rosillo, Brady Wade and Bryce Premo.

They’re the only two on the team with state tournament experience, but both have confidence that the entire team can make the trek to Becker for this spring’s state meet.

“I think we can go as a team,” Wind said. “We definitely have to become more consistent, though.”

The Panthers have only a handful of meets remaining before sections in Bemidji, scheduled for May 29. They’ve been tearing through their conference meets and should be primed to go come tournament time.

“We try and get over there to Bemidji quite a bit, so it’s a familiar course,” Brunelle said. “We win that, hopefully we can win the state tournament. That’d be pretty cool.”