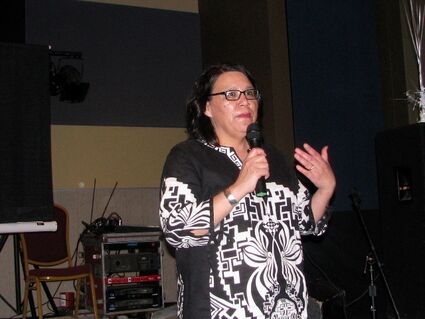 More than 300 Elders attended Red Lake's second annual Elder Gathering at Seven Clans Casino Red Lake on Thursday and Friday, April 5-6, 2012. Much of the agenda for the Summit was just good fun.

Upon entering the complex, one would see several informational booths describing Tribal Programs and businesses scattered around the edge of the hotel lobby, particularly those concerned with elders. Many provided give-a-ways.

A mixing of youth and elders made for much of the fun of the event. Young volunteers from the high school girls basketball team, performed needed tasks during the event, including serving the elders during lunch and supper times.

“This is one of the things we were looking for in the Elders Conference," said organizer Thelma May, “we wanted to have youth and elders mixing together, learning together, having fun together and enjoying each other.”

Drawings were held throughout the event for door prizes, most of small value, so that nearly everyone won something. The first 300 registrants received a T-shirts with a colorful logo “Honoring Our Elders written in Ojibwe on the front and in English on the back. All also received tote bags with some give-a-ways inside with the same colorful logo “Ezhi-apiitenimindwaa Gigichi-aya'aaminaanig” (Honoring Our Elders) written in Ojibwe.

The event began with registration on Thursday beginning at 8 AM. At 9 AM Spiritual Elder Eugene Stillday offered the invocation, followed by the posting of colors, and drum songs by the Red Lake Singers. Co-Facilitators Cheri Goodwin and Delwyn Holthusen, Jr. delivered opening remarks before introducing the key-note speaker for the day Andy Wells.

Andy Wells, Red Lake Nation Member and owner of Wells Technology tailored his speech to the audience. His presentation was entitled "The Three Lives of an Elder; Self, Family and Community." Wells, and elder himself brought his mother to the gathering, she is 93.

At 10:30 AM, Red Lake Nation Royalty, dressed in full regalia, took their turns providing a dance exhibition. Johnny Smith was the emcee, and shared background on the various dance exhibited. Much to the delight of all present, many of the young people introduced themselves to the elders speaking Ojibwe, a testament to the revitalization of culture and language that has been going on at Red Lake and in Indian Country.

A fun session called “Getting Jiggy with the Elders” was on the agenda next. Staff from the Jourdain/Perpich Extended Care and Red Lake High School Project Preserve participated in a demonstration of intergenerational activities. "We have been doing this type of thing at the High School since 1999," said Goodwin a staff person at Extended Care.

The Red Lake High School girls basketball teams along with coach Randy Houlthusen then kicked into gear, and with a plate in each hand gathered soups…both or either hominy and wild rice…sandwich, fruit, and beverage and delivered lunch to their seated elders. The meal was sponsored by the Traditional Foods Program and Red Lake Gaming.

A Red Lake Youth Talent Showcase was held from 1 to 2 p.m. The talent included Athena and James Cloud with a Hand Drum Demonstration, Celina Johnson on the Violin, and Michelle Mountain played the Keyboards. Then 3rd Graders from the Elementary School performed a short play called the "Great Kapok Tree." and finally a performance by the Red Lake High School Band.

Glennis Dudley and Jackie Dion then took the stage to talk about "Healthy Lifestyles, a Matter of Balance." This was followed by a trip down memory lane with a "Slide Show Presentation" of old photos put together by Gary Fuller, director of the Red Lake Nation Tribal Library and Archives with help from Georgia Downwind of the New Beginnings Program.

From 3:00 to 6:00 PM open activities were scheduled that included limo rides complete with a serving of sparkling grape juice in champaign glasses. There was a special stop at Red Lake Nation Boys & Girls Club to keep with the Gathering's theme of mixing youth and elder.

Family photos were taken by Michael Barrett from Red Lake Net News, while Red Lake Nation College conducted Ojibwe Bingo. Bingo just like any other, except the bingo cards that were used had Ojibwe words rather than numbers.

At 5 p.m., lots of laughs ensued with a "Shapey/Skaky Legs" Contest. There was both a women's and men's devision. Contestants stood behind a curtain and moved about vying for the loudest applause that would determine the winner of having the most "interesting" legs.

A gourmet supper of World Famous Red Lake Walleye was served around 5:00 PM which was sponsored by the Red Lake Nation Fishery and Red Lake Gaming.

At 6:30 PM, entertainment was provided by nationally acclaimed American Indian stand-up comic Vaughn EagleBear. "I am the guy who made the song 'John Wayne's Teeth' in the movie 'Smoke Signals'," EagleBear announced from the stage, and then did a short rendition much to the bemusement of all. EagleBear was one of the performers on the first all Indian "SHOWTIME" comedy special "Goin' Native: American Indian Comedy Slam! No Reservations Needed…" EagleBear is from Omak Washington and Norris South Dakota. He now lives in Spokane Washington.

The evening closed with what was billed as “the Late Night Session”, which included both a Black Jack Tournament, and Cribbage Tournament.

On Friday, the day began with registration again from 8 to 9 AM. Co-emcee Cheri Goodwin then introduced Red Lake Chairman Floyd Jourdain, Jr., who welcomed the participants and then sang a song with hand drum in honor of the Elders.

At about 9:15 a large audience anticipated words from the “Keynote Speaker” of the conference, Brenda J. Child. Child is a member of the Red Lake Band and is a professor of American Indian Studies at the University of Minnesota. She is the author of two books; "Boarding School Seasons: American Indian Families, 1900 – 1940," and "Holding Our World Together: Ojibwe Women and the Survival of Community." She is also the editor for the Penguin Library of American Indian History. Child gave away several autographed books.

Things then loosened up a bit after the sobering presentation by Child. A “Talent/Variety Show” would close out the morning and the conference. Eleven elders participated including; Anna Gibbs, Royce Kingbird, Elizabeth “Pug” Kingbird, Johnny Smith, Lillian Stand, Sally May, Charlotte Monette, Carol Barrett, William Spears, Marilyn Martin, Williamette Morrison, and Ramona Manuel who vied for first, second and third place prizes determined by the applause of the audience.

Lillian Stand took third place and Sally May took second in the talent contest. But the person who brought the house down was Ramona Manuel who did an"Exotic Dance." A humorous performance, but if you want to know details, you'll have to ask Ramona. Suffice to say it was no contest, Manuel took first prize.

Very nice Plaques were then awarded to the following persons: 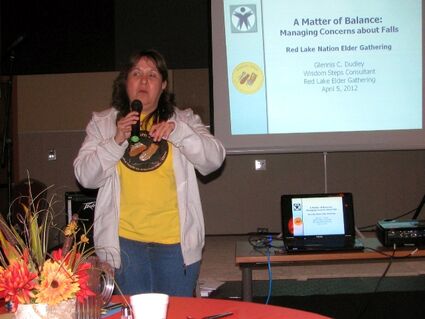 Glennis Dudley talks about "Healthy Lifestyles, a Matter of Balance."

Winner of the Canvass Artwork Board of Elders Gathering Logo, Eugene Stillday

Lunch and a traveling song closed out the first annual Elders Conference. "We had a great time, and I think all who came did as well," said Goodwin. "We love the idea of young and old mixing at an Elders Gathering, I think it's turned out to be a grand idea. All of us want to thank all the elders for coming, for without their participation it would have been nothing. A big chi-miigwech to the elders of Red Lake Nation."