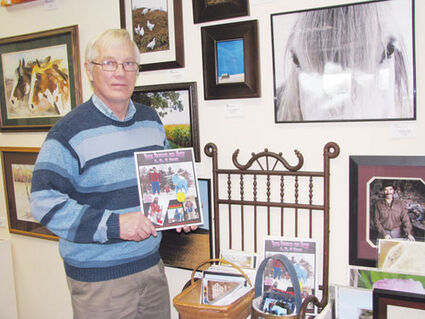 John Eggers holds his Paul Bunyan and Babe ABC book in front of his photography display at Gallery North, one of a number of places that sell the book. Laurie Swenson | Bemidji Pioneer.

BEMIDJI –After putting out a 2012 calendar to celebrate the 75th birthday of Bemidji’s Paul Bunyan, John Eggers started thinking about what to do next to honor the iconic statue. He settled on an ABC book for kids.

“As far as I know, it’s the best Paul Bunyan ABC book out there,” Eggers boasted.

Before you decide he’s patting himself on the back too much, it’s the only Paul Bunyan ABC book out there – as far as he knows. Eggers said it dawned on him that in all the Paul Bunyan memorabilia he had seen, he’d never come across an ABC book. He decided there should be one. He serves on the board of the Beltrami County Historical Society, which is hosting a Paul Bunyan exhibit all year, and has been part of the process of coming up with ideas to celebrate Paul during his birthday year.

Eggers, a writer, educator and public speaker, is also a photographer who joined Gallery North three months ago and has an exhibit there. He took most of the photos of Paul and Babe for “Paul Bunyan and Babe A, B, C Book,” whose letters are derived from shapes within the photos.

“I looked at every angle of Paul and Babe,” Eggers said, but eventually he had to use other Pauls as well.

“I couldn’t find all the letters in our Paul and Babe, so I had to go to Brainerd and Akeley,” he said, pointing to the page for the letter “X,” which boasts the Akeley Paul’s crisscrossed suspenders.

“The kids will have a lot of fun with it, I think,” Eggers said, noting that children can find and learn the letters, and read a story about Paul and Babe that relates to each letter. “They learn their ABCs, they learn the legend of Paul Bunyan … and it’s an activity book.”

Eggers dedicated the book to his first-grade teacher, Clarice Voxland, who he said taught him his ABCs. She is pictured with him on the first page of the book.

It took some effort for Eggers to find all the letters of the alphabet in the photos he took of Paul and Babe. Paul’s upside-down legs form the “V,” and the Akeley Paul’s curved boot produced the “J.”

“I had a hard time finding the letter J,” Eggers said, “so I went to Akeley, and there it was on his boot. I had to tip it on its side.” (The photo, not the statue.)

Each page has the ABCs printed in a colorful strip on the bottom of the page.

“It’s a great activity book for kids,” said Carol Olson, manager of the Tourist Information Center and a Paul and Babe memorabilia collector for the past 25 years. Olson plans to buy some copies of the books as gifts for nieces and nephews. She added that it’s a good way for kids to learn more about Paul Bunyan.

After the letter “Z,” which is found amid the red plaid squares on Paul’s shirt, the book concludes with a Paul and Babe quiz, some conservation information on a backdrop of old Paul and Babe postcards, and, on the final page, the pictorial answers to the ABC questions in case kids weren’t able to spot all the letters.

The ABC book was printed at Arrow Printing in Bemidji and sells for $15. Eggers showed it for the first time April 9 during a talk he gave at the Bemidji Public Library for his other recently published book, “More Than Just Words.” The talk drew 30 to 40 people, he said.

“I think it will sell well,” he said.

Eggers hopes schools will buy the book for their libraries. He plans to visit local and area schools and promote the book statewide for school libraries, especially including Akeley and Brainerd.

He said his next ABC book will be on ice fishing. Eggers will have to wait a while to take photos for that book.