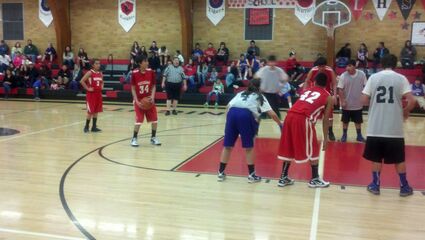 On Thursday, March 22 a group of youngsters headed west to take part in the tournament sponsored by the Coeur d’Alene (CDA) Tribal Youth Council. We had 4 kids cancel out on us the night before and the morning of departure, but the show had to go on, and we were able to pick up two girls from CDA, who were very, very good and really helped. The rules required at least 2 girls on the floor at all times, so our 3 girls got plenty of playing time. 12 teams made up the 14&under division. Most were from the Idaho and Washington state area. We set out on our journey at 10am, and proceeded to the Fargo area and jumped on I-94 West, with our 1st stop marked for Bismarck. We arrived and had dinner at Space Aliens because Golden Corral was closed for remodeling. We set back out on the road with the next stop planned for Billings, but after dinner we made it 2 hours up the road for a potty break. We arrived in Billings at midnight, fueled up, switched drivers and stretched the legs a little and got back on the road. We finally hit the Idaho border and couldn’t wait for daybreak to see these huge mountains we could vaguely see outlined in the dark. About 6am Pacific time it started getting light out and what a sight! We also encountered a snow storm, which made for interesting driving up and down the mountain passes, but thankfully the van had new tires and the roads were wet, not icy. The sounds of excitement and cameras taking pictures filled the back of the van, as the entire van was in awe with the scenery. We finally got checked in at 8am Pacific time, and everyone settled in, showered or swam for a few hours before making our way to the Wellness center for a Youth Leadership Conference. They have quite the facility with a basketball court, exercise equipment, pools, hot tubs, healthy snack bar and conference rooms. They said it was built in 98, but it looked brand new as I could tell they took pride in it and maintained it very well. After the conference, we retreated back to the hotel for some much needed R&R after the 24 hour journey. I would encourage anyone who likes casinos and travelling to make a trip here, the rooms were beautiful, the casino nice, and they just went through an expansion to add more rooms and a high end area for the big spenders. They had 4 restaurants, including a real nice steakhouse that cooked aged steaks over an open fire grill, the price tag was not cheap, but a few of our kids decided to try it out. I ordered the $50 Porterhouse with tableside service, which was a unique experience as you will see in the picture.

Game time was 9:40am against Lapwai, who had a 6’ 4” kid and some awesome girls, we held the lead at the half, before their full court press gave us problems and they were able to beat us. In game #2 we faced All-Nations, and were in another battle, but were able to take control and get the win. In game #3 we faced the Kool-Aid Jammers, who were from the CDA communities, we were up 25-19 at the half and managed to run out the clock and get the win 43-29! In game #4 we face Yo Pewe, another local team and again were able to get the victory to advance and play Yakima, who also looked strong and had a height advantage on us. They got up by as many as 17, before a timeout and our full court press was put on along with a zone offense to cut the lead to 7 before time expired. It was a real good tournament filled with very good teams, the team that beat us in game #1 went on to win it.

The kids received lots of compliments, two coaches said one of our players was the best at the tournament and wanted to recruit him for their traveling team! They made some new friends and stated to me how nice the people from Coeur d’Alene were, which I will vouch for. They took very good care of us, even presented us with a beautiful Pendleton blanket for being the team who travelled the furthest to get there. That evening there was a Pow-wow at the event center in the casino/hotel and the kids were able to take that in. We met up at 8am local time Sunday and went had breakfast at the buffet before getting back on the road. We were anxious to see the mountains we missed coming through because of the dark, and were we ever treated to a beautiful travelling day with temps in the 60’s and nothing but endless sunshine in the Montana sky. We ascended to an elevation of 6,380 feet before ascending down, which feels way different than going up.

I had heard lots of good things about the Coeur d’Alene Tribe and what their Youth Council has been doing in my few travels to conferences across the country. This opportunity came on a forwarded email, and thanks to Chairman Jourdain’s support and his staff for taking care of the arrangements, we were able to make it happen. A huge thanks to Ron Lussier and Tom Barrett for the support they lent financially and with transportation, they helped make an awesome experience happen. My super-driving partner Dan Jourdain, who volunteered for the overnight shift, and put in some hours behind the wheel through the mountain passes at night in a snow storm on the way there and across the not so exciting eastern Montana and North Dakota at night. We both felt that the miles in Montana were longer than any other state we have drove through. We were greeted to 12 Eagles along the River Road and Sandy Beach area upon our return Monday. And last, but not least to the kids and their parents who allowed their children to be a part of this. It is a big choice to let your child go on a trip like this, and I thank you for your trust in me to allow your child to attend. I hope the pictures and their stories of their experience will let you know that you made the right choice. Miigwetch! 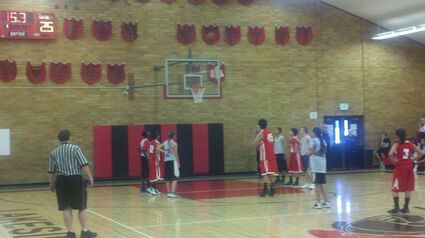