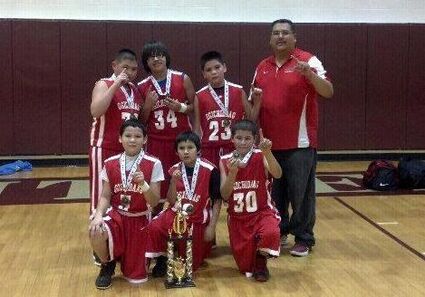 The tournament hosted two age divisions, 5th & under and 6th gr boys. Red Lake was well represented with an elementary boy’s team and girl’s team in the 5th & under and St. Mary’s Mission & a team in the 6th gr division. The bus loaded up at 830am and set out to Cass Lake High School.

In the 6th gr boys division Red Lake easily defeated Cass Lake 2 in its first game with a 53-28. In their 2nd game they faced St. Mary’s and had another excellent performance with a 67-24 win to set them up for the Championship game! In other action Cass Lake 2 defeated St. Mary’s in the 3rd place game. Championship game was a good one, the Panthers were also 2-0 and had the height advantage with two 6’ 2” players down low and a good point guard who was quick off the dribble and could knock down the 3! Red Lake had 5 players coming in and picked up a player out of the stands who had come to watch his friend play, 3 had played together all season for Red Lake and 2 did for Bemidji, the other young man is now going to start playing next year. The game was close with Cass Lake holding the lead until the 4-minute mark when pressing was allowed. RL was able to go on a serious defensive run and take a 2 point lead into halftime! The 2nd half was a repeat of the 1st with Cass Lake taking control early until the last 4 minutes when down by 7 RL made a championship run to get the victory by 4! These kids played hard and despite the height disadvantage were able to get some huge rebounds late in the game and their press was amazing, forcing numerous steals. Hats of to these young men who battled hard in that last game! 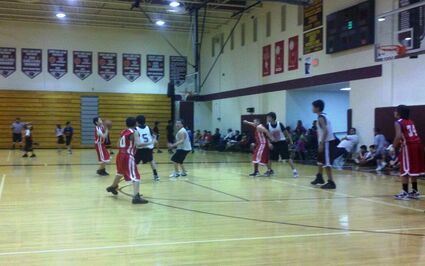 In the 5th & Under division Red Lake Elementary had 10 players show up and played Onigum in game #1 and were able to get the win 34-32 in a good close game! They faced the Elementary Girls in game #2 and this was a good, good game that went down to the wire, but the boys were able to come back for the 2-pt win in the last minute against a very good girls team! The Girls played for 3rd place against Onigum and got the victory for the 3rd place finish, way to go Girls!! In the Championship game against Cass Lake, the game was good and close with both teams making runs at each other, with 30 seconds left the game was tied and we took a timeout to draw up the game winner. However, we were unable to execute and the game ended up going into over time! In the end, we ran out of gas, and Cass hit some big shots to take the 7 point victory and the Championship!

What an awesome day of youth basketball. Thanks to all those who helped make it possible!!