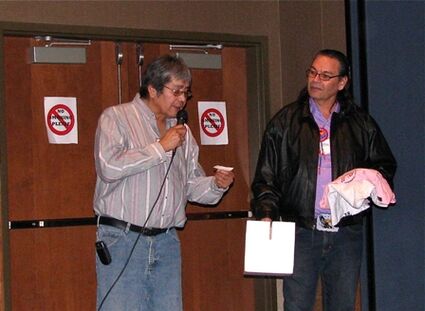 Nearly 250 people involved in law enforcement, and drug and alcohol services attended workshops and presentations from 9 AM to 4:30 PM on both days. Participants came not only from Red Lake, but Leech Lake, and White Earth, but Bemidji and other communities as well.

Daytime activities included workshops and presentations on drugs, public safety, living a positive lifestyle, education, gang identification/intervention, and traditional teachings. As is customary, lunch was served each day, along with door prizes and much more.

After opening ceremonies that included a prayer by Spiritual Elder Larry Stillday and drum song, Emcee Murphy Thomas opened the session with introductions. At about 9:30 AM, a welcome and an opening address was presented by Red Lake Chairman Floyd Jourdain, Jr.

At 10 a.m., Dennis Hisgun (LADC, Sisseton/Whapeton Dakota Nation) gave the KeyNote address on "Historical Trauma." Hisgun is the Director of the Oshki-Manido program, a residential treatment program serving Native American adolescents in Bemidji. He previously was the director of the White Earth Chemical dependency program for 25 years.

Historical trauma refers to a cumulative wounding across generations as well as during one’s lifetime. Using conservative estimates, 2/3 of indigenous people in North America were killed violently or through disease between 1500-1900. The theory goes on to say that there is an “intergenerational transmission”, meaning there is a psychological transfer of trauma response across generations.

Some say that colonization and forms of assimilation result in “altered states of self”, that is, a loss of traditional values and culture. Colonization encompasses a wide range of strategies, not only to destroy peoples, but to destroy their sense of being a people.

The answer, according to Hisgun, "is the decolonizing of Indigenous minds by re-centering Indigenous values and cultural practices within research practice, and an essential piece is an Indigenous peoples’ struggle for self-determination."

At about 11:00 a.m., a general presentation on gangs was presented by Garfield Steele and Jerome LeBeaux from a personal perspective. Lunch followed.

Concurrent Workshop sessions took up the afternoon. In the first session, participants could learn more details on "Gang Prevention Programs" with morning presenters Garfield Steele and Jerome LeBeaux, or revisit morning Key Note speaker Dennis Hisgun, who conducted a workshop on "Living in Balance with the Use of the Medicine Wheel."

In the third workshop, Dr. Cecil White Hat, (Lakota Sioux) a frequent participant at past summits, led a workshop on "Traditional Parenting." Dr. White Hat has a very strong resume including being the Director of the chemical dependency program at the Minneapolis American Indian Center, as a professor at Lakehead University, Thunder Bay, and Iowa State University.

"In the traditional kinship system family culture was governed by familiarity and respect," says White Hat. "Family members based their behavior according to age, gender, and proximity of relationship. These principles enabled the group to be cohesive, workable, fostered harmony, and avoided conflict. Neglect of children was unknown. A child without parents was taken into someone’s home. Elders were objects of care and devotion, treated with respect and revered for their knowledge."

White Hat gives hope by suggesting looking to cultural remedies, and that this awareness can lead to liberation. The first step is love and acceptance of oneself and of being Indian. A restoration of family is needed. He points out where there is historical grief and loss, you can also find historical strength and healing. “One cannot treat addiction without addressing the spiritual and cultural issues”, said White Hat. “This is critical to long-term sobriety”, he concluded.

Finally Judy Thorlen led a session on "Buprenorphine assisted treatment for opiate addiction with American Indians", in the Awaazisii (Bullhead) room. Thorlen is a licensed Alcohol Drug counselor for the Leech Lake band at the Leech Lake Opioid program in Cass Lake. She has worked as a LADC for seven years, and as a counselor with the use of Medication assisted treatment for over four years. She graduated from BSU with a bachelors degree in psychology, and is currently a grad student at BSU studying in the masters program of counseling psychology.

A Round Dance Social, featuring hand drumming and singing in the Cree and Ojibwe style took place on Wednesday Evening at 6:00 p.m. Several drummers and singers made a circle around several tables in the center of the event center, taking turns with songs. Many watched, listened and danced.

About 9:30 a.m. after and opening prayer, drum song and announcements, a Key Note speech was given by Rick Moldenhauer entitled "A Decade of Pain." Moldenhauer is a treatment services consultant at the Alcohol and Drug abuse Division of the Department of Human Services.

“We need to sit down as a community with our law enforcement, and other stakeholders and try and work out a plan,” Brunelle said. “It’s not going to get any better unless we do something now. It is not possible for law enforcement to do this alone.”

Brunelle was followed by Red Lake Family and Children Services Director, Paula Woods, who spoke on the issues from a Family Services Perspective.

Filling out the morning was a report on Chemical Health Programs by it's Executive Director, Tom Barrett. Barrett described the many services Chemical Health provides. "Drug problems exist through both Indian and Non-Indian communities," said Barrett, "we all must work together. We take clients from other reservations and we send them clients. We help each other out. It’s all about helping people.”

After lunch, the participants broke into groups using the "7 Clan system." In each registrants packet was a drawing of each of Red Lake's seven clan symbols. So if a person had a drawing of Makwa in his/her packet, he/she joined the Makwa table, Migizi the Migizi table, etc.

This “closing break out session” was used to evaluate the summit’s activities, brainstorm ideas to champion, and then how to apply those ideas in the reservation’s communities.

Participants met in these small "clan" groups of six to ten or so to tackle various aspects discussed during the day and a half of presentations. Traditional teachings were considered quite important to achieve these goals.

During report times, the groups came up with several action items. They included but were not limited to: getting all applicable tribal programs to join in the fight; consistent communications are needed between various programs; these ideas need to be applied in the communities, schools, PTO; there needs to be more community involvement with the schools and to provide cultural education; are just a small number of the ideas expressed.

The Summit closed out with drawings for prizes and a Traveling Song by the drum group.

MISSION AND GOAL OF THE DRUG/GANG SUMMIT 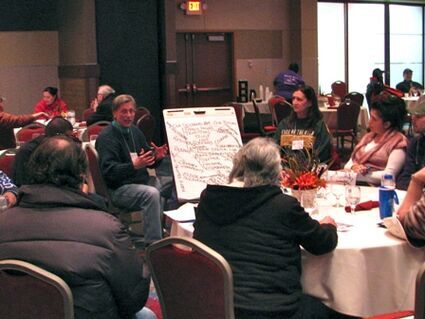 The mission of the Red Lake Drug and Gang Summit is to educate and mobilize tribal agencies, professionals, schools and community members in a variety of efforts against drugs and crime in our communities. The goal of the summit is to gather and collect information on how to address issues of crime, drugs and violence while working closely with district representatives and the Red Lake Tribal Council.

The impetus for the event began at a special Tribal Council meeting in September 2006. At that time it was announced that the Tribal Chairman was calling for a summit on Methamphetamine/crack cocaine to be held. The Indian & Free Drug Program, Project Safe Neighborhoods and the Red Lake Nation Coalition (White Bison) now the Seven Clans Wellbriety Coalition was instructed to head the summit.