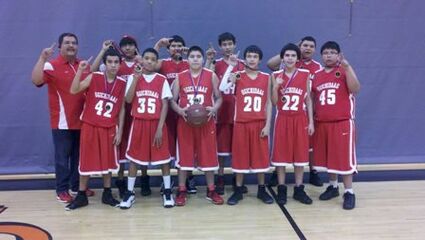 Game #1 - 8th Gr Boys were coming off a 76-27 victory Friday Night over Pine River and faced the hometown team of Grand Rapids and came out hot to hold a 27-17 halftime lead. GR played tough in the 2nd half and took the lead late in the game before Will Morrison hit a big 3 with 40 seconds left to tie it up and Sonny Martin grabbed a steal on the ensuing inbounds and score the and1 for a 52-49 win! Martin led with 26pts, Morrison 15pts.

Game #3 - They got things going offensively against Two Harbors behind defensive stealsand fastbreaks to take a 44-23 halftime lead. They then outscored them 31-10 in the second half in a game that saw 8 players score with Morrison leading the way with 21pts, 12 rebs, 4stls, Bryce Cloud with 17pts, 6stls, Martin 12pts, 12rebs, 6assts.

Game #4 - Championship vs. Bemidji in a rematch of last Saturdays action at the Lumberjack invitational in Bemidji that the Lumberjacks won by 12. This time we had Sonny Martin and the team was motivated to get the win this time and came out behind some tenacious defense to take control early and hold a 32-10 halftime lead. Knowing Bemidji had a good team the halftime message was to not let up because of the ealry lead. The game got competitive and Bemidji played tough and things got heated when a bemidji player took out a RL player on a flagrant foul punch to the face on a fast break layup attempt by Martin, who was having another outstanding game, with 10mins left to go that saw a ejection result and a busted lip. The boys played hard throughout and got the victory 52-38 with Morrison leading with 19pts, 7rebs, 3stls. Cloud with 17pts, 6stls, Martin 10pts, 12rebs, 3stls

Game #2 - against a very good, tall Bemidji team who were champions in the Lumberjack Invitational, and again came up short. Wood and White led with 10pts, Trent Head hit two 3's, Cook 5pts.

Game #3 - faced Grand Rapids Orange and were down by 4 with 40 seconds to go before some big steals led to scoring opportunities and fouls. The team has bee working on free throws and it payed off as Rob Beaulieu hit 2 clutch shots to give his team a 4 point lead, another steal led to White at the line who hit the first but missed the second, but Beaulieu tipped it in at the buzzer to give them their first win of the day! Wood and White led scorers with 14pts.

Game #4 - in game 3 in a row they faced Duluth and again came up short. This team is made up of primarily 6th graders who are getting great experience against kids older than them.

7th gr Girls - made up of alot of 6th graders, no score available, but took 3rd. 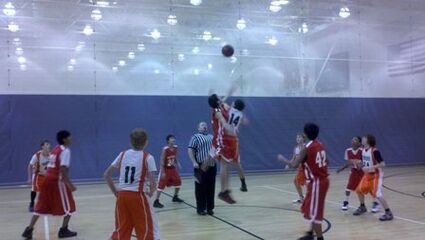 Thanks to the RL School District for entry fees, meals and transportation and to the RL Tribal Council for the brand new Nike F.I.T. jerseys for all the Jr Hi teams!