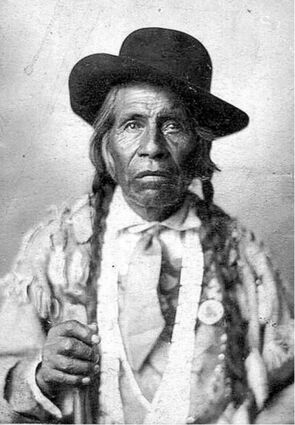 The Chief Bemidji Statue Committee is raising funds to commission a new statue and publish a corresponding educational brochure about Shaynowishkung, or Chief Bemidji, and the role he played in the community’s history. Beltrami County Historical Society

He watched the children play and run around. While they sat on woodpiles to rest, he offered them maple sugar cakes and told stories. He took them for rides in his birch bark canoe.

Few writings exist that reference Shaynowishkung, or Chief Bemidji, as he also was known, but those that do repeat the word “kind” in describing him, according to Robert Treuer.

“This man put his imprint on this community in the way he treated people and his love for children,” Treuer has said.

The community is about to learn a whole lot more about the American Indian who was the first to welcome the non-native settlers to the area.

An ongoing effort to replace the existing wooden Chief Bemidji statue along the Lake Bemidji waterfront has broadened. The goal now is to not only commission a new statue of Shaynowishkung, but to also publish a corresponding educational brochure that informs about the man and the role he played in this community’s history.

And a range of people are making that happen.

Assisting the Chief Bemidji Statue Committee – the champion of the project – are college students and staff with the Beltrami County History Center.

Elaine Fleming teaches a course titled History of Leech Lake at the Leech Lake Tribal College. The main project for her students this fall is to research the era during which Shaynowishkung lived. As part of that project, they are examining his life.

Many questions remain about Shaynowishkung’s life, including his date of birth and where he was buried.

The class project aims to answer these questions – and many others.

Sue Bruns, a volunteer with the History Center, also has been researching his life.

Bruns’ research is still ongoing, but she already has learned some interesting points about Shaynowishkung’s life.

People have generally believed that Shaynowishkung was born near Inger, Minn., in 1833 or 1834.

But there is some doubt.

An obituary written in the Beltrami County News upon his death stated, “He didn’t know his own age, but he has frequently stated that he was a big young man the year of the ‘shooting stars’ in 1833, which is one of the periods from which the Indians of this section reckon time.”

As a boy, he traveled with his father to the lakes of Bemidji for wild rice, fish, game and berries.

He married a Leech Lake Pillager Indian woman in 1860. Most accounts say they had eight children; one says 10. Four girls and one boy lived to adulthood.

After his wife died in 1882 near Cass Lake, he loaded up his possessions and children in a birch bark canoe, traveled up the Mississippi River and settled on the south shore of Lake Bemidji.

Shaynowishkung was never a “real” chief. He was the spokesperson for about 50 Indian people.

Fleming said he was one of the “new chiefs.” Traditional chiefs followed patriarchal, or hereditarily, lineage. But Shaynowishkung, who became known as Chief Bemidji, was not chief by blood but was a spokesperson for a group of American Indians.

These new leaders were very charismatic and were identified as chiefs by the white population, she said.

“A Walk Through Bemidji,” written by Rosemary Amble Given in 1910, said that Shaynowishkung lived near Bemidji for 40 years and was “greatly esteemed” by early settlers. When he was about 70 years old, he moved 14 miles north of Cass Lake to Rice Lake, where he made birch bark canoes.

Shaynowishkung died in 1904. It is believed that his funeral, held in front of City Hall, was the largest ever held in Bemidji.

“All flags in town were flown at half mast, and the businesses were all closed while the city father held the funeral at City Hall,” wrote Gamble. “The entire village gathered to pay their respects.”

Children dropped nickels and dimes into a collection that would go toward a monument to be erected in his honor.

That monument was placed in Greenwood Cemetery.

But Shaynowishkung is not buried there.

Carolyn Jacobs, the co-chairwoman of the Chief Bemidji Statue Committee, said she hopes that members of the community who have pictures or accounts of Shaynowishkung will come forward to assist in the research.

There are likely artifacts, stories and photographs that have not been uncovered, she said.

“Anything to help us put together an educational document,” she said.